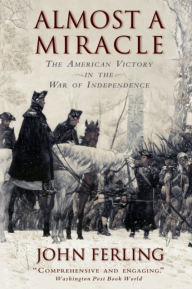 In this gripping chronicle of America's struggle for independence, award-winning historian John Ferling transports readers to the grim realities of that war, capturing an eight-year conflict filled with heroism, suffering, cowardice, betrayal, and fierce dedication. As Ferling demonstrates, it was a war that America came much closer to losing than is now usually remembered. General George Washingt… on put it best when he said that the American victory was &quotelittle short of a standing miracle.&quoteAlmost a Miracle offers an illuminating portrait of America's triumph, offering vivid descriptions of all the major engagements, from the first shots fired on Lexington Green to the surrender of General Cornwallis at Yorktown, revealing how these battles often hinged on intangibles such as leadership under fire, heroism, good fortune, blunders, tenacity, and surprise. Ferling paints sharp-eyed portraits of the key figures in the war, including General Washington and other American officers and civilian leaders. Some do not always measure up to their iconic reputations, including Washington himself. The book also examines the many faceless men who soldiered, often for years on end, braving untold dangers and enduring abounding miseries. The author explains why they served and sacrificed, and sees them as the forgotten heroes who won American independence.

Other eBooks releases by John Ferling