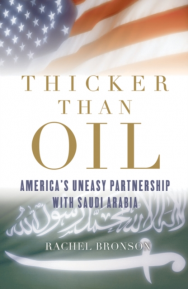 For fifty-five years, the United States and Saudi Arabia were solid partners. Then came the 9/11 attacks, which sorely tested that relationship. In Thicker than Oil, Rachel Bronson reveals why the partnership became so intimate and how the countries' shared interests sowed the seeds of today's most pressing problem--Islamic radicalism. Drawing on a wide range of archival material, declassified… documents, and interviews with leading Saudi and American officials, and including many colorful stories of diplomatic adventures and misadventures, Bronson chronicles a history of close, and always controversial, contacts. She argues that contrary to popular belief the relationship was never simply about &quoteoil for security.&quote Saudi Arabia's geographic location and religiously motivated foreign policy figured prominently in American efforts to defeat &quotegodless communism.&quote From Africa to Afghanistan, Egypt to Nicaragua, the two worked to beat back Soviet expansion. But decisions made for hardheaded Cold War purposes left behind a legacy that today enflames the Middle East. Looking forward, Bronson outlines the challenges confronting the relationship. The Saudi government faces a zealous internal opposition bent on America's and Saudi Arabia's destruction. Yet from the perspective of both countries, the status quo is clearly unsustainable.

Other eBooks releases by Rachel Bronson